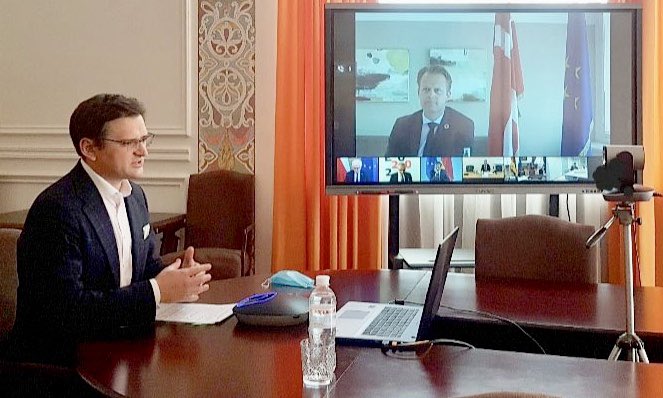 
New challenges of international relations require new methods of addressing them. Is diplomacy changing today or are its principles and instruments still valid?

In a broad sense, diplomacy has always been and remains an art of being persuasive. However, a lot has changed recently. Even visually. It used to be associated with men in black suits and ties. Not anymore. Diplomacy in the modern world equally belongs to women as well as men. Public diplomacy can outweigh negotiations behind closed doors. This is not surprising and reflects the general trend of democratisation. This is how democracies function. They serve interests of the people who become real stakeholders. That is why communication takes a central stage in decision-making. As they say, you win wars by winning hearts.

This is especially important for us right now, as the Russian aggression against Ukraine has entered its seventh year. In its military strategy, Russia pays critical attention to using non-military means. We would simply not have been able to survive in the past six years without gaining muscle in the new, modern tools of communication.

At the same time, classical diplomacy has not lost its importance. National positions need to be developed and outlined. Be it in a verbal note or a tweet. Public diplomacy may help in shaping public opinion, but it is unlikely to succeed in convincing, let us say, judges of an international court. This is where classical paperwork is still very much needed. We sit down with our legal teams to thoroughly prepare documented claims. Because we still do believe that international law matters. Despite some countries tending to ignore it, experience shows they cannot entirely ignore court decisions.

We also should not forget the much-needed consular protection, which still requires a lot of traditional fieldwork. Twitter will not really help much in protecting rights of our citizens abroad. Sometimes a consul needs to drive across the entire country to help a group of Ukrainian citizens in need.

As diplomacy changes with the world and from one generation to another, core ideas remain intact. “Represent. Protect. Promote”, as Ukraine’s MFA motto says.

Can Twiplomacy and informal negotiations be a substitute for classical diplomacy?

There are two schools of thought in Ukraine representing polar views on the matter. Some say classical diplomacy is not relevant anymore, and only informal channels help cut deals. Others insist there is no room for informal negotiations, and everything should only be discussed in a formal way. Both approaches seem terribly incorrect to me. Decent fact-based and result-oriented diplomacy is a carefully crafted mix of the two.

In the past, verbal notes were read out loud in front of a minister or an ambassador. Now they are forwarded by email or on WhatsApp. Channels, audiences, protocol, and etiquette may all change. But goals don’t. They are basically about making people abroad admire, respect, and support your country. Be it governments, tourists, investors, or business. To that end, one can use the UN General Assembly tribune, its sidelines, cafes, or online communications. I think it is not about replacing one with the other. We should think about it in terms of added value.

How much money should a state spend on diplomacy?

Each hryvnia spent on diplomacy saves two hryvnias on defence. Furthermore, diplomacy helps bring investment into the country and create opportunities for Ukrainian companies in foreign markets. For example, we have now relaunched our Investors and Exporters Council at MFA to help create opportunities for Ukrainian businesses abroad and assist foreign investors in entering Ukraine. We work closely with Ukrainian companies to help them liberalise trade with other countries, establish B2B contacts with foreign partners. At the end of the day, the better they do, the better it is for Ukraine’s economy. Businesses will create more jobs, pay more salaries and taxes.

Is diplomacy costly? Well, the famous saying, “People who don’t want to feed their army, will soon be feeding the enemy’s one,” is fully applicable in this case as well.

What are the limits of diplomacy’s effectiveness in today’s world?

The limits of diplomacy’s effectiveness are where we are able to expand them. Meaning, practically, they are much broader than we can imagine.

Diplomacy primarily deals with difficult cases. All others simply do not need diplomacy. Looking from outside, sometimes it may feel like progress is lacking. In fact, diplomacy requires a lot of patience. When years of work culminate in just one strategic move or call. Consistent and focused work is absolutely essential to be able to use those opportunities appropriately.

The role of diplomacy in the post-WWII era has dramatically increased. It is not only about new institutions, alliances, and formats. One invention boosted it to unprecedented levels, which was aviation. Flights became widespread and affordable. For the first time in human history, leaders and diplomats gained an opportunity to meet at any place and any time within 10-15 hours of flight maximum. This had simply never been possible before. Previous global transportation models allowed incomparably fewer contact. In my opinion, it is not only due to the existence of nuclear arms that global conflict has been avoided for the past 75 years. It is also thanks to this enormous increase in the volume of diplomacy.

Modern communications are bringing the volume of diplomatic contacts to an even higher level. The invention of the internet surely has had a profound impact on it. I am now looking forward to seeing how artificial intelligence will change diplomacy. And it is up to us to make this impact work for global peace and stability, not vice versa.

Could you describe an ideal diplomat of tomorrow?

Hopefully, one not wearing a medical face mask.

An ideal diplomat is a cross-functional, agile person with principles. He or she is able to learn and adapt constantly. He or she is flexible but holds his or her ground. Omni-purpose but being himself or herself. Persuasive but natural. These basic skills have only gained value over the past decade and will surely be even more valuable tomorrow.


Dmytro Kuleba, PhD, Amb. is Minister for Foreign Affairs of Ukraine. In 2003, Amb. Kuleba graduated with honours from the Institute of International Relations, Taras Shevchenko University (Kyiv, Ukraine), where he studied international law, and in 2006, he obtained a Ph.D. in Law. From 2003 to 2013, he worked in different capacities at the Ministry of Foreign Affairs of Ukraine, including at the Permanent Mission of Ukraine to the OSCE. After quitting civil service in 2013, Dmytro Kuleba chaired the board of the UART Foundation for Cultural Diplomacy. In 2014, Amb. Kuleba returned to the Ministry of Foreign Affairs as ambassador-at-large to introduce the concepts of digital diplomacy, strategic communications, cultural diplomacy, and public diplomacy into the ministry’s work. In 2016, Amb. Kuleba was appointed Permanent Representative of Ukraine to the Council of Europe. From August 2019 to March 2020, Deputy Prime Minister for European and Euro-Atlantic Integration of Ukraine. Since March 2020, he serves as Minister for Foreign Affairs of Ukraine. Dmytro Kuleba is the author of the book “The War for Reality: How to Win in the World of Fakes, Truths, and Communities.”